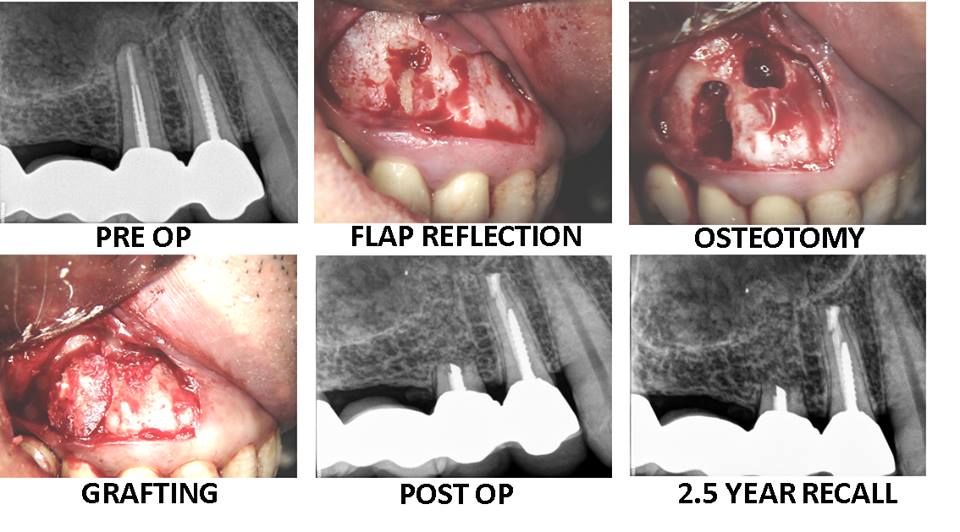 ENDODONTIC TREATMENT PLANNING DILEMMAS:
Here we present an interesting case of a 47yo healthy Asian male with an exceptionally esthetic FPD #3-5 with #4 as the pier abutment. The FPD was done a little over a year prior to initial presentation to our office. The patient had subsequently presented to our office with persistent bite discomfort and pain upon digital palation of the “gums”. Although both #4 and #5 were infected, #4 had a vertical root fracture traveling from the apical –> coronal (confirmed via CBCT and subsequent surgical access). Apical surgery was initially planned on #5 and full root resection #4 through a submarginal flap; rationale to maintain esthetics and preserve the alveolar crest if possible. Conventional microsurgical apicoecotmy was performed on #5 without complication. As root resection was performed on #4, we noted that the fracture terminated prior to completing the entire resection. Therefore, we left what small amount of tooth there was within the bone hopefully to preserve esthetics and promote easier clensibility. 2.5 years later, the patient remains asymptomatic, there doesn’t appear to be radiograpahic evidence of pathology, and esthetics of the FPD was maintained as if surgery was never done (minus a minor surgical scar line). Fingers crossed that this continues to be a success….